As I lift the flap to my tent, I can hear the surf a few KMs away down across the dunes. It’s pumping, it’s loud, and it just about drowns out the rumble of my tummy, despite having just finished dinner. My last 5-minute packet rice and rainwater collected from the nearby tank. There is a light breeze blowing up over our campground – a raised site with views of Lake Cootharaba to the west. 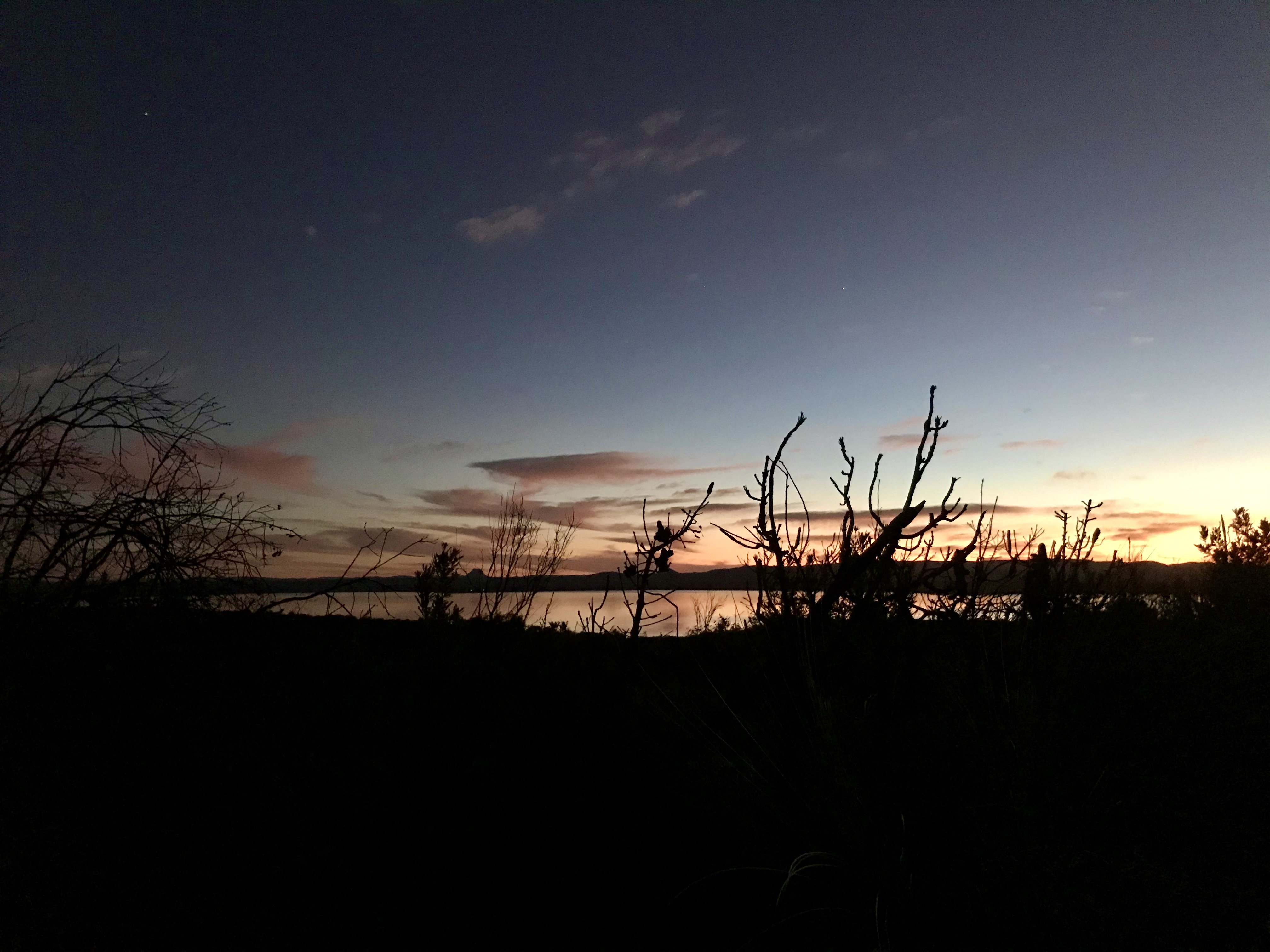 Above me, the stars are fighting for attention in a darkened winter sky while the soft glow of a red sunset is slipping away over the ranges to the west. The air is warmer here than last night’s camp down along the Noosa River but it’s still cold. It’s only 5:30pm and I’m ready for bed. With no open fires allowed in the National Park, there’s no reason to stay outside or up. So headlamp on, it’s time to crawl into my sleeping bag, journal and then read for a bit. Tomorrow, we hike out, and the thought of real food has me looking forward to completing the final day. Four days of muesli bars, packet rice on the stove and nothing but water has me wanting something with a little more body and flavour.

The last time I did a multi-day walk was back in mid-December in Patagonia, with two friends (Jane and Pete) from London. It was approaching mid-summer in Chile, and while the ‘W’ Circuit in the Torres del Paine National Park was busy with plenty of international tourists, it wasn’t full. Riots and demonstrations up and down the country since October had had an impact on the tourism industry. But that was our gain when we undertook our 4-day hike through one of nature’s most spectacular wonderlands. 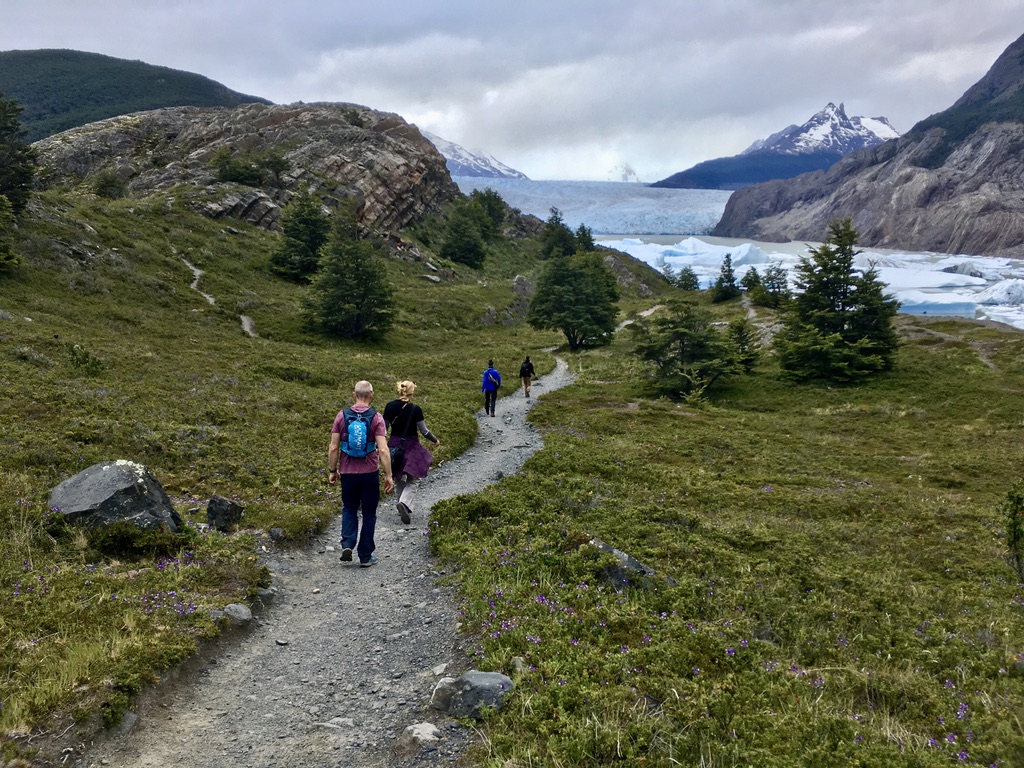 The ‘W’ get’s its name from the three valleys you hike up and into along its 80 km length. Each valley is different, all stunning. We got up close to the Grey Glacier which spat out icebergs the size of football pitches into the lake it kisses, the next valley had us surrounded by hanging glaciers, and fingers of rock and ice, the last offered rocky pillars that reached into the clouds themselves. We stayed in refuges, fixed tents and domes, bought meals at the campgrounds and beers/wine to lubricate our chat as we reflected on our daily sights and what lay ahead. All we had to do was walk, dodge some rain, and book our meals – although the logistics were made easier thanks to the forward (6 months earlier) planning of Jane who navigated the complex world of campsite booking, Chilean style. 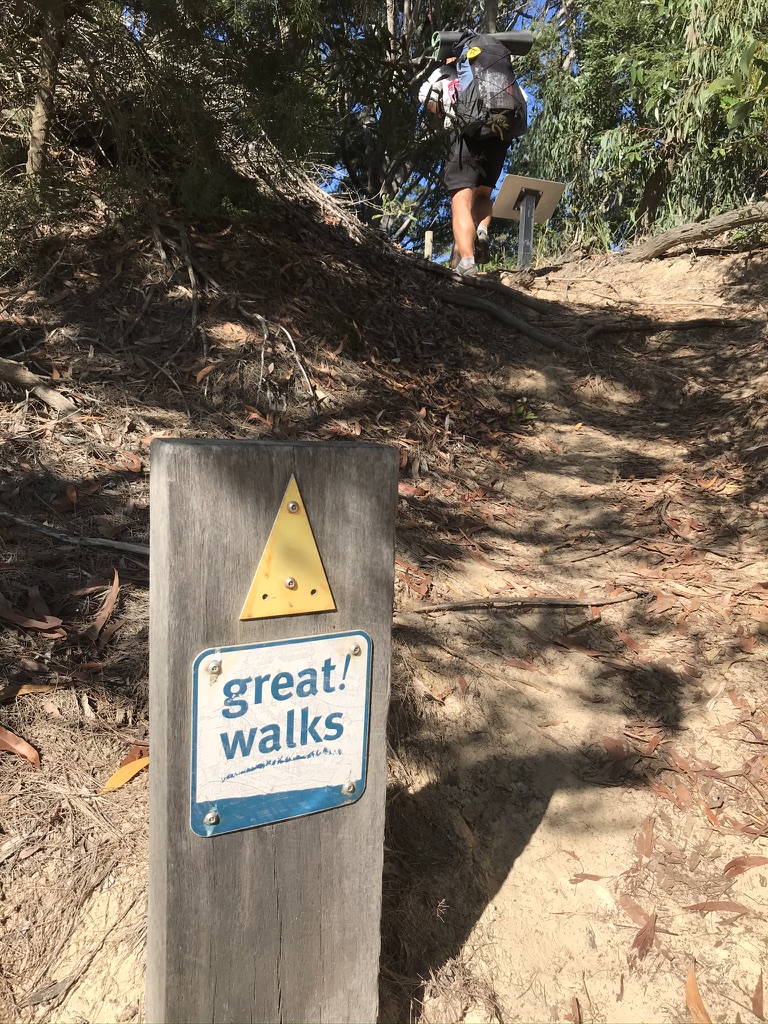 Cooloola Great Walk was a little different. There were no glaciers. No soaring mountains. Just an ancient sandmass caught between a river system and the sea.

Late June is winter in Queensland. Our days would reach the mid-20s, shorts and t-shirt weather. The nights would drop to single digits with the camp beside the Noosa River down as low as 4c. It had been quite a few years since doing a self-supported hike, but the five days of the hiking would be spent with John, a mate who’d seen his share of long-distance walks – several over 3000kms – so I figured I was in good hands.

We managed to get a lift with another friend – who happened to be in the area – to the trail start at the wonderfully named Rainbow Beach and then hiked down the coast. We were doing the 88kms in reverse, from north to south. Which in our opinion was the best direction to travel with better views south over dunes, beaches and towards Noosa in the distance.

The campsites were all walkers camps, meaning they had several cleared areas big enough for a tent, a communal rainwater tank for freshwater, and a single composting toilet. No showers, no flushing loo, no shops, and no lights or wifi. But that, for me, was all part of the fun, the challenge of roughing it.I’d brought just enough food for the five days although our last day – Friday – was a lighter than usual breakfast – we ran out of gas so no porridge and we had to borrow some gas the night before from a very friendly University Instructor taking his Outdoor Ed students on a shake-down hike. 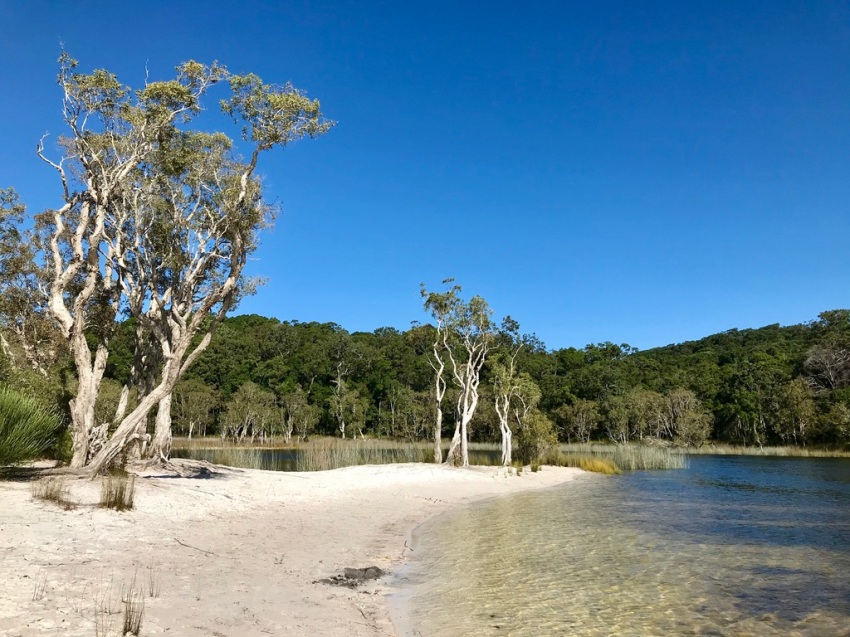 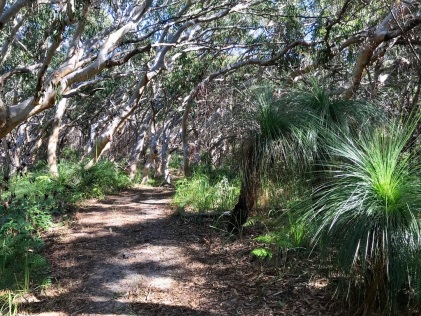 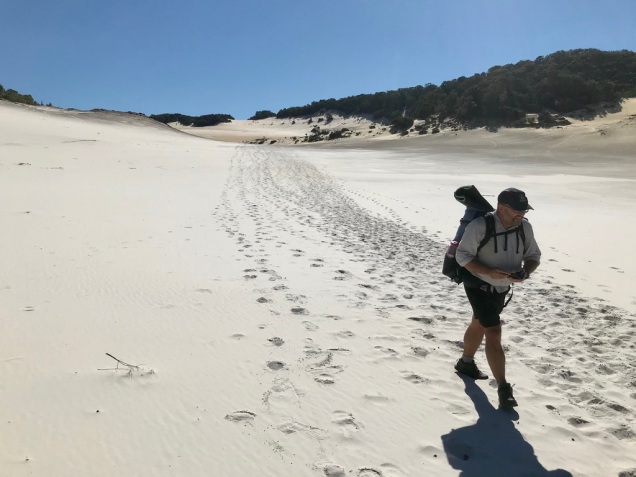 The highlights for me were hiking through a variety of environments, from rainforest and tall eucalyptus forest, to dry coastal woodland and massive sand blows. We were accompanied by a continual soundtrack of birdlife, a constantly changing chorus between locations, between sunrise and sunset, between the north and the south. We hiked past hanging lakes, camped beside tea tree coloured rivers, and walked along the spines of towering ancient sand dunes, where the lucky could see migrating whales (not us), or smell the surf while we followed beach sidetracks. John and I met two local teachers, who’d done this walk many times and never seen it so busy – we met about 5-7 other hikers each day. Normally they’d see 2-3 over 5 days. COVID had forced Queenslanders to explore their own state, hike their own back yard and in some cases, discover camping for the first time.

Even the short swim on day 3, at the creatively named campsite 3, offered the excitement of sorts. Two small wooden jetties hung over the banks of the Noosa River for the canoeists and kayakers who use the campgrounds. 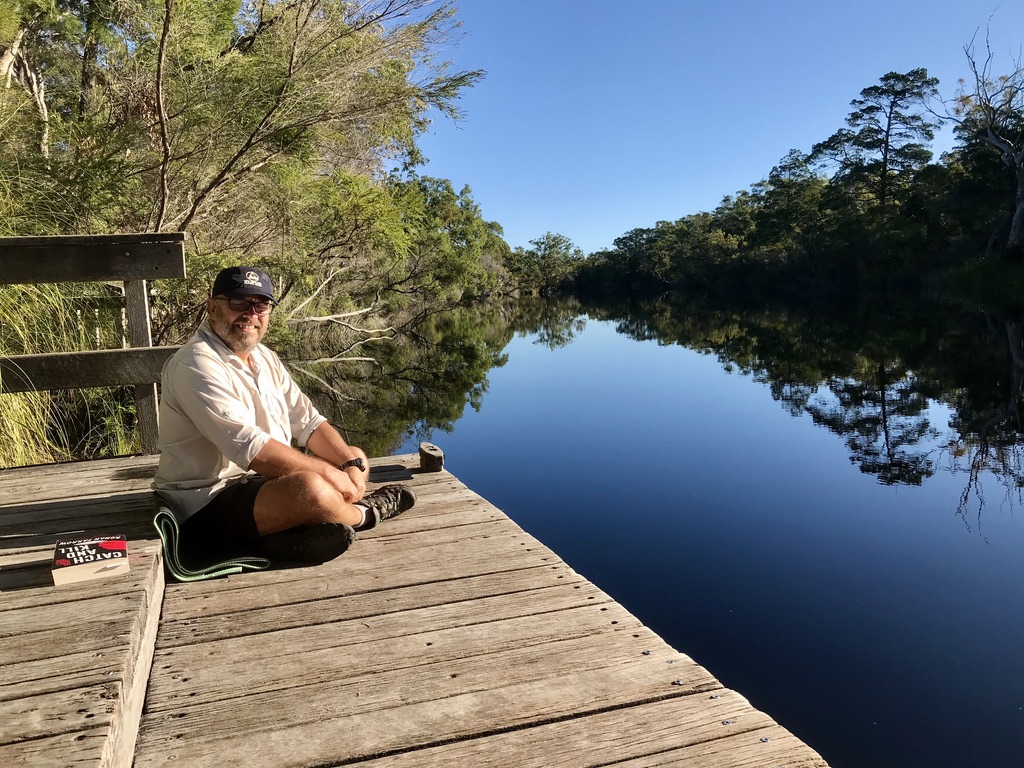 Signs in the campsite toilets advised against jumping or diving into the water illustrating the dangers of hidden trees and branches at the edge of the jetty, as well as the cheeky bull sharks lurking beneath them. Bull sharks are well known all along the coast, swimming far up rivers and into the suburban canals that populate the east coast of Australia. 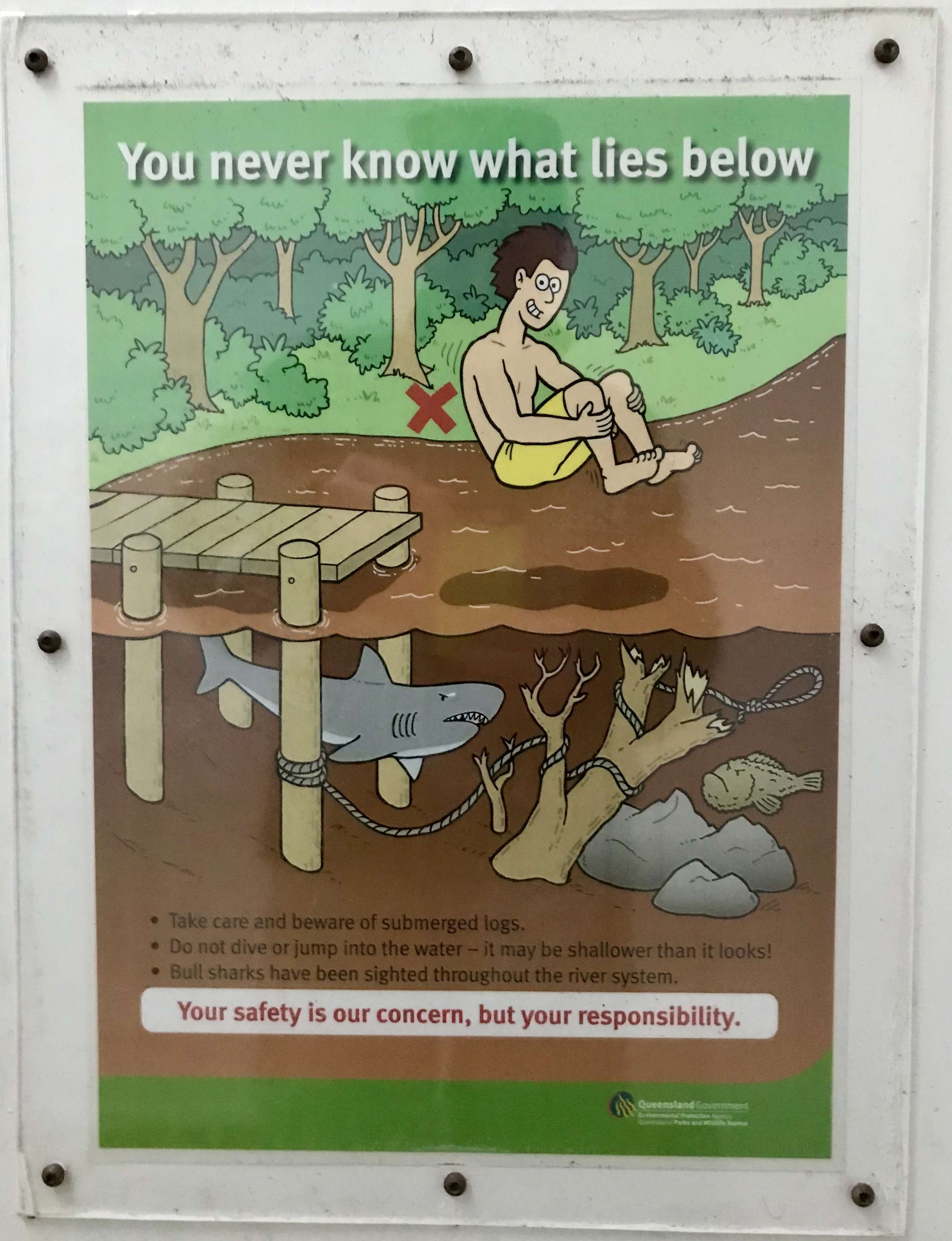 The same teachers we met highlighted that ‘thousands’ swim in the Noosa River each year. I wasn’t swimming with a cast of thousands – I was going solo – and the water was a murky, tea tree brown, and cold.

I considered my options, reviewed the risks. And I was hot, sweaty, and in need of a wash. I got in and I swam (perhaps my form went out the window a little) all of about 5m, between the jetties, and wasted no time climbing out. This was a quick dip, an even quicker wash – no point teasing the locals unnecessarily. I caught just enough of the afternoon sun to dry off before it dipped behind the trees across the river. With the retiring sun, the temperatures dropped.

But I was buzzing.

Cooloola comes from the local Gubbi Gubbi people, and means “the sound the wind makes as it whispers through the branches of the trees”.

Some campsites caught the wind, and those nights I fell asleep to the sound of a breeze as it pushed its way through the eucalypt trees, kauri pine and banksia bushes around us. It was solid walking for 5 days, not long days, but often a rollercoaster of sand blows, ancient dune ridges and small hills. And it wasn’t just the views or close contact with nature – including dingo tracks across the sand – that made this a lovely walk or the interesting hikers we met along the trail. We even picked up another hiker on our final day. It was also those moments, those fleeting tastes, of remoteness and independence that made this hike special.

Torres del Paine in Chile had grandeur in spadefuls, but Cooloola was simpler, charming almost, and offered me a just a little hint of wilderness.

Walks like this bring you back to basics – all you need is food, water and shelter – and a little treat at the end. Our reward after 88km and 5 days hiking was leaving the trail and entering the pub.
An icy cold beer and freshly made burger is not a bad way to end a Great Walk. But better, is to book another walk.